The A 303 in Wiltshire was closed in both directions as was the A 350 for a period this evening after a major fire at the Eat&Go café at Chicklade service station.

Crews from Dorset and Wiltshire Fire and Rescue service were being assisted by crews from Hampshire and Devon and Somerset to deal with a ‘large fire’ at the site that broke out this afternoon just before 4pm.
There were no reported injuries but a spokesman for Dorset and Wiltshire Fire and Rescue said: ‘We would like to inform local residents to keep all doors and windows closed to stop any smoke entering their property.’

Highways England said in a message on their website: ‘The A303 is closed in both directions for safety reasons between the A350 (Chicklade) and the A36 (Deptford) due to an adjacent property fire which is being attended by the Fire Service.

‘Diversion routes are available with westbound traffic following the ‘solid black diamond’ symbol leaving the A303 taking the A36 northbound to Crockerton and then proceeding onto the A350 heading south to re-join the A303. Eastbound traffic is advised to leave the A303 at the B3081 junction at Leigh Common following the ‘solid black triangle’ symbol. This will take traffic south east towards Shaftesbury to the A350 junction. Traffic is then able to join the A350 heading north to re-join the A303.’

Drivers were advised to allow extra time for their journey.

UPDATE: The affected roads were re-opened in both directions later in the evening. 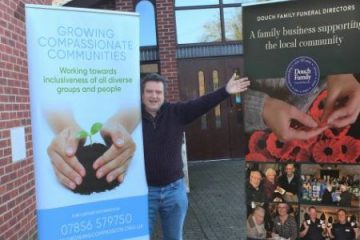