The military has removed a breakdown truck parked in Gillingham that was used to move the car of the poisoned former Russian spy Sergei Skripal and his daughter Yulia. 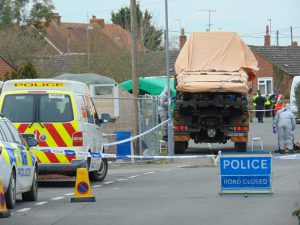 A section of Hyde Road in Gillingham between Waverland Terrace Bungalows and Coronation Road was sealed off today by Dorset Police as specialist units from the RAF Regiment prepared to move the truck, which belongs to the Ashley Wood Recovery firm based in Blandford.

However, this cordon was later extended as more army equipment arrived.

By 2pm the recovery truck had been covered and slowly winched on board a military lorry by another military vehicle.

By 4.40pm, accompanied by a police motorcycle escort, the truck had been taken away from Gillingham for analysis by forensic experts.

The military vehicles who carried the recovery were escorted  from the Porton Down research centre in Wiltshire by officers from the Metropolitan Police. It was not immediately clear whether some of the people at the scene wearing pale grey biohazard suits were also from Porton Down.

The police stressed there was no risk to public health and the homes in the street affected were not evacuated but no one was allowed to pass through the road and people who chose to remain at home had to stay inside all day while the truck was removed.

Meanwhile the driver, who asked not to be identified, told Gillingham & Shaftesbury News: ‘I’m fine, I’ve been checked up in hospital and all is fine, I’m not worried.’ Asked about the incident he said: ‘I was just doing my job.’ But he said he had been asked not to say any more about it.

Meanwhile it emerged that police had been watching guard over the truck for at least 48 hours before it was removed on Wednesday.

‘They were there on Monday and right through the night and through Tuesday too,’ said one local resident. ‘They were keeping an eye on it all that time.

It is understood the truck had been parked in Hyde Road since last Friday and before that had been used as usual by the driver.

‘He went off to work in it every day as normal – and this was days after the incident,’ said another resident. 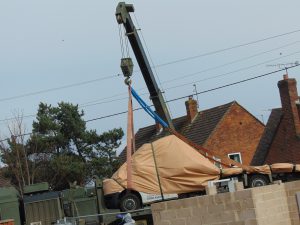 ‘It’s been here all that time which is a worry for us if it was contaminated – anyone could have touched it.’

It is believed that this recovery truck – shown in the photo here – was the truck used to remove the former spy’s red BMW car that was left at Sainsbury’s car park in Salisbury at around 1.40pm on Sunday, 4 March, the day of the attack.

Police have appealed for witnesses who saw the pair – who remain in a critical condition –  sitting in the BMW 3-Series before they fell ill.

One theory among others being investigated is whether the car was used to administer the deadly Novichok nerve agent, perhaps by being smeared on the door handles or put in the ventilation system.

Army units set up a tent in Hyde Road where specialists could carry out initial analysis and carried in specialist equipment in preparation for the removal of the recovery lorry.

The removal of the truck took most of the day.

Most local people appear unworried by the fact that the recovery truck had been parked in the street for days after any possible nerve agent contamination.

However there was surprise that it took so long to be tracked down and removed by the authorities.

‘I’m not worried about the health side of it but I do wonder why it took them so long to remove it days after the incident,’ Mike Tolman from nearby New Close said.

A spokesperson for the Metropolitan Police who are handling the investigation said: ‘The military is assisting police to remove a number of vehicles and items from areas of Dorset, following the incident in Salisbury.

‘The public should not be alarmed and the public health advice remains the same.

‘The military has the expertise and capability to respond to a range of contingencies. The Ministry of Defence regularly assists the emergency services and local authorities in the UK. Military assistance will continue as necessary during this investigation.’

Meanwhile North Dorset MP Simon Hoare raised the issue of the incident in Gillingham during the Prime Minister’s statement in the House of Commons.

Simon Hoare: ‘I’m not expecting my Rt Hon Friend to comment on the detail, but this morning residents in my constituency, Hyde Road in Gillingham, saw the Metropolitan Police and the Army in place, the street in lockdown, removing vehicles and items linked to the Salisbury incident. I’m not expecting my Rt Hon Friend to give a running commentary of current operations, but could she confirm two things? First, that she and the Government and the Security Services are doing all that they can to keep my constituents safe and can she arrange for somebody to provide a briefing to me as the Member of Parliament as to precisely what’s happening.’

To which Theresa May replied: ‘Can I say to my Hon Friend I am very happy to do that. As he will be aware the police investigation does continue and we cannot say where that investigation is going to take the police in terms of their further inquiries, but I will ensure that he is provided with a briefing as the Member of Parliament.’

In Blandford a spokeswoman for the recovery truck’s owners Ashley Wood Recovery said: ‘We cannot make any comment.’