Late last year an appeal was launched via Gillingham News asking for people to send in their loose pearls in memory of someone, so these could be used to make them in to items of jewellery to auction, and raise funds for the Royal British Legion Poppy Appeal.

Each donation of pearls representing a life lost, just as had happened a hundred years ago in 1921, just before the Poppy became the symbol of Remembrance.

The appeal was launched by Gillingham resident, Anne Kings, who says: ‘Even though I have spent most of my life in the jewellery trade, I only discovered a couple of years ago, after reading the book ‘Pearls before Poppies’, that the pearl was a symbol of remembrance before the poppy.

‘The book tells the story about the Pearl Appeal in 1918, which then followed the Poppy becoming the symbol in 1921, exactly 100 years ago (see book covers below).

‘After reading the story about the Red Cross Poppy Appeal, I decided that I would try and “re-invent the wheel” last year, when I knew that the Royal British Legion Poppy Appeal were struggling to get funds due to Covid.

‘I put a simple piece of editorial in our local online newspaper and told the story, then told the readers that if they wanted to send me pearls in memory of someone, then I would make up as many pearl necklaces as I could, they would be auctioned, and every penny would go to the RBL Poppy Appeal.

‘The response was completely overwhelming, but due to Covid lockdowns, things have been a bit stop and start, with regards to being able to get all the pearls sorted, redesigned, and threaded into necklaces.  I have now had the help of local jewellers in Gillingham, Allum & Sidaway, and now working alongside Nicky Gray, manager of Allum & Sidaway’s Gillingham branch, we have almost finished making up in the region of 50 items of necklaces and bracelets to be sold by Charterhouse auctioneers in Sherborne.

‘There have been times while I have been quietly threading a necklace, that just knowing for whom and why some pearls have been sent, has choked me up completely.

‘Because some items were donated that were still beautiful but of no real monetary value, all of which came with lovely very emotional reasons for being donated, stories of loved ones that had died, and some stories going back as far as WW1, I decided that I needed to put them all into something special.

‘Shireen Brickell, who is also a well-known local artist, is now dedicated

to producing a piece of wall art using every pearl donated in memory of a loved one.   The idea is that she creates a stunning piece of wall art depicting a White Poppy, which is the symbol of peace.   Shireen has also recognised the emotional value in the beautiful clasps which held all these memories together, and has produced another stunning framed wall feature which is completely unique.

‘The jewellery which will now be sold is amazing; and there is something to suit all budgets, all tastes, and all ages. Black pearls, white pearls, pink, and rows of pearls intermingled with other meaningful gemstones. The necklaces, bracelets, and even wall art, will make the perfect gift, whether it’s for yourself or a special present. But knowing that every penny raised will be going towards this year’s Poppy Appeal.’

Charterhouse auctioneers in Sherborne have kindly agreed to sell these items as a special collection in their Christmas Jewellery auction, with all their usual charges donated to the Royal British Legion Poppy Appeal.

People can either bid online, or attend the live auction in Charterhouse Saleroom, and wave a hand if they prefer not to do it online.

The auction date is on Thursday November 4. Viewing days are on 1, 2, and 3 November at Charterhouse Salerooms, Long Street, Sherborne DT9 3BS. Tel 01935 812277. www.charterhouse-auction.com 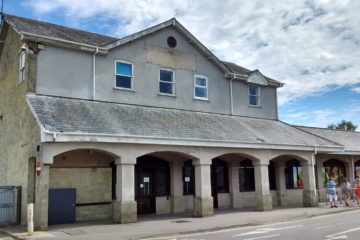