Gillingham will not hold  any ceremony for the switching on of the town’s Christmas lights, councillors were told this week.

Mayor Barry Von Clemens said that under earlier guidance the town had still been hoping for a limited event this year with just a float from the local Lions Club.

‘But the government has updated its Covid regulations yet again and to be honest, the amount of hoops that we would have to jump through, and the marshals and the work identifying people in groups of 6 etc just for me basically saying “the lights are on” … The marshalling would have been a bigger event than the actual switching on of the lights,’ said Councillor Von Clemens, who sits on the council’s Christmas event and festive lighting sub-committee.

‘We would like to propose that the whole thing is cancelled this year and that we just turn the lights on with no ceremony. Hopefully we can return to a full event next year,’ he said.

Councillor Von Clemens said that if there were no formal ceremony because of the Covid restrictions he would lay a wreath as mayor. ‘So that the town does pay its respect albeit with just one person,’ he told fellow councillors on the town’s general purposes committee on Monday.

*The committee also agreed to spend £2,500 on two replacement CCTV cameras for the town.

A report on the use of the cameras in the town stated: ‘In Gillingham CCTV surveillance has been used to identify a vehicle involved in a burglary in an outlying village. It has helped to dispute reported criminal damage to vehicles parked in the High Street. It has identified offenders engaged in drugs and has been used to successfully carry out an operation which was of concern to neighbours witnessing ASB and drug issues.

‘Traffic officers have used footage to capture vehicles prior to accidents to give them an insight to their manner of driving. It has also been used for minor offences which were causing distress. The equipment has been used to identify offenders committing criminal damage in the High Street and, in doing so, has also captured other unreported offences.’

Gillingham house lights up in aid of Help for Heroes 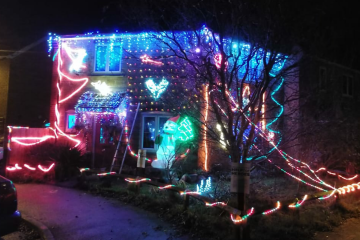