The former Co-op site off the High Street in Gillingham is to be developed into a residential area of 42 homes, mostly flats, under plans unveiled by the landowners.

Hopkins Estates has drawn up detailed plans to construct 30 residential flats, eight assisted living flats and four mews houses on the site, which has most recently been used as a car park.

This central site was home to the town’s Co-op store until it was damaged by fire, and the building itself has remained unoccupied for around ten years.

The developers have now sealed off the site and are inviting the public to have their say on the proposals for turning the town centre site into a residential area to be known as ‘Chantry Mews’.

On their website Hopkins say: ‘This is an exciting redevelopment opportunity for the centre of Gillingham.

‘The site comprises previously developed land and therefore represents an opportunity for redevelopment. The existing site does not make efficient use of land and the building is tired, dated and set back from the High Street with limited visual “presence” within the town centre.’

It continues: ‘The development will increase the number of homes available to residents of the Gillingham area by 42 units. These will provide a mix of housing options expanding the choice of housing in the area.

‘This is an important aspect of the development as it helps reduce the demand and lack of delivery of housing for Gillingham.’

According to the developers the residential flats will be split into 17 two-bedroom and 13 one-bedroom apartments. There will also be eight two-bedroom assisted living apartments with associated communal space. The four mew houses will each have two bedrooms.

Hopkins Estates say they are keen to ensure the new development blends in with the area. ‘The irregularity of the size and positioning of the units minimises visual impact of the new development and better integrates it within its new setting, and the demolition of the store allows for the new block to be pulled away from existing properties to the east, improving their outlook,’ says the website.

Once a planning application has been formally made it will be considered by the planning committee at Gillingham Town Council – who only have a consultative say – and then by Dorset Council who make the final decision on whether to approve it or not. 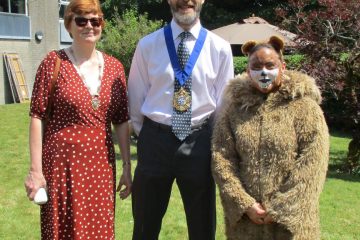