Police are investigating a dramatic incident in Gillingham today after a van drove at high speed into a wall off the Peacemarsh roundabout.

After the crash the bloodied driver then got out of the wrecked van – and took the car of a man who had stopped to offer help.

Shortly afterwards the driver crashed that car into another van on the B3092 heading towards Mere.

After stopping other traffic in the road the driver, described as in his 50s, overweight and with a beard, was eventually arrested by police officers.

Onlookers say that the path in front of the wall that was demolished is busy on weekday mornings with school pupils either walking to Gillingham School or up the road towards Milton-on-Stour primary school.

‘Had this happened just a short time later our children would have been right in the middle of it,’ said one parent.

The incident began just after 7.30am on Tuesday when the white van was seen speeding up the main Peacemarsh road towards the roundabout on the exit from the town towards Mere.

‘I heard a bang about 7.30am/7.45am,’ said one onlooker. ‘The van was doing about 70 and coming from the direction of the town centre, weaving in and out of traffic.’

The witness said the van then clipped a red Seat car on the road, which has been left badly dented.

‘Looking at the poles on the roundabout, he’s come across the roundabout and his steering has gone and he ended up in the wall,’ he said.

But that was not the end of the drama.

A passing motorist in a blue car saw the crash in his rear view mirror and stopped to help the driver of the crashed van, whose vehicle had crossed the pavement and demolished the wall of a resident’s home.

‘When I got there the man got out and ran up to my car and drove off in that. My first instinct had been to stop and help the man, not lock my car before I did so,’ said the driver. ‘I better not describe how that made me feel.’

He added: ‘Lots of schoolchildren use this pavement to go to school. If this had happened half an hour later they’d have been in the middle of it.’

Shortly after the van driver took the blue car he crashed it into a van just up the B3092 in the direction of Mere, and got out in to the road where he was seen by a local taxi driver driving in the opposite direction.

‘I was coming into Gillingham and he was in the middle of the road covered in blood, stopping everyone and saying “if you want to be alive go this way, if you want to die go that way”. I thought he was drunk so I told him to get off the road. He tried to put his hands in my car, so I closed the windows and drove off,’ said the taxi driver.

The fire brigade was called to the scene and traffic was held up for a while they secured the crash site. Police officers also examined the area where wreckage and debris were strewn. A brick pillar from the garden wall into which the driver smashed had also collapsed.

A spokesperson for Dorset Police said: ‘We were called at 7.39am on Tuesday 12 July 2022 to a report of a two-vehicle collision involving a car and a van in Marlott Road in Gillingham.

‘It is reported that the driver of one of the vehicles left the scene in another vehicle and was subsequently involved in a further reported single vehicle collision nearby.

‘Officers are in attendance with the fire and ambulance services. The male driver has been detained.’

No supply problems but use water 'responsibly', local residents told 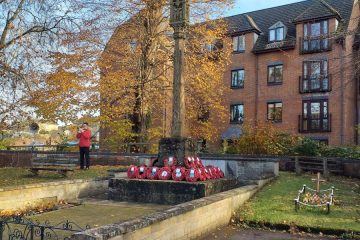