Councillors in Gillingham have for a second time voted unanimously to oppose plans for an 80-house development off Common Mead Lane.

Developers Fairfax submitted a new application for the site after their original plans were narrowly turned down by Dorset councillors in August. The company said that they had ‘listened‘ to objections to building on the greenfield site.

However, on Monday night members of the Gillingham Town Council’s planning committee reiterated their earlier opposition to the plans, which they say is contrary to the town’s Neighbourhood Plan, will eat up valuable green space and land for recreational use and will cause additional traffic problems.

Councillor Barry Von Clemens told the meeting: ‘It’s clear from the huge list of objections that this is not a welcome development.

‘And if granted the decision may comply with planning law and regulations but it would be against the will of the people of Gillingham and their Neighbourhood Plan which they voted for.’

Councillor Mike Gould, who was speaking in a personal capacity and was one of six objectors who spoke in the public session at the meeting, said he was ‘terribly disappointed’ that a new application had been made after the original was turned down by Dorset Council in August.

He said he had helped draw up the original Neighbourhood Plan that had taken six years to complete, and which had earmarked the fields targeted by the application as green spaces and ‘recreational areas’.

He added: ‘Do we run roughshod over the current Neighbourhood Plan?’

After town councillors voted against the plans, the application will now go to Dorset Council for their decision.

* Councillors on the town’s planning committee also opposed plans to develop a solar farm at Park Farm off Shaftesbury Road.

Councillor Keith Wareham expressed the views of other councillors when he said he was in favour in principle of a solar farm in the general area. But he said this planned development was ‘too large’ and would ‘impact’ on the nearby Royal Forest project.

‘The conservation officer has said there will be harm to designated heritage sites,’ he said.

Councillor Barry Von Clemens said: ‘The proposal will have a significant detrimental visual impact on the area, particularly when viewed from Shaftesbury and Motcombe.’

The application will be decided on by Dorset Council. 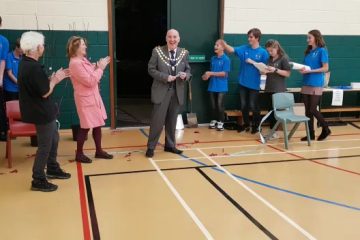