Councillors in Gillingham have voted unanimously to recommend rejecting plans to build four new homes and extend an existing property at Endcot on Station Road, Gillingham, saying the development would simply add to the ‘parking chaos’ in the area.

A number of local residents objected to the scheme when it was brought before the town council’s planning committee last month.

Karen Roper said she was a direct neighbour of the proposed development, which also includes plans for a cycle shop, and that parking was already ‘absolutely diabolical’. She told councillors: ‘Residents in that area have parking permits which don’t actually guarantee us a space but we pay for a space. So the possibility of ten new residents in that road is just a silly idea and one that should be completely objected to.’

Another resident Robin Mudge said it was impossible to find a parking space between 4pm and 6pm and pointed out that Station Road was already dangerous, with buses driving through and motorists exceeding the speed limit. ‘The road should be a one-way system – someone is going to get killed,’ he said.

Councillor Barry Von Clemens told the meeting: ‘There is a huge parking problem not only in Station Road but also the adjacent roads and the thought that these additional dwellings would throw up more parking chaos in an already very chaotic road is quite frightening.’

A number of councillors said the proposed site was an eyesore and needed development but that this was not the right project. 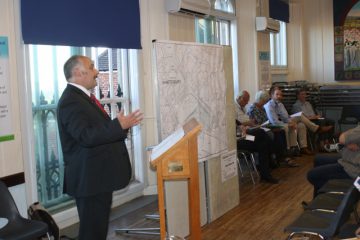