Councillors on the Town Council’s planning committee have voted to recommend refusing permission for a further 20 new homes in the centre of the town between Barnaby Mead and Bay Lane.

The PG Ridgley Trust has applied for permission to build the new houses on a patch of land next to Gillingham School, and say that 25 percent of the properties will be ‘affordable homes’.

In the application the trust’s agents say the development would feature an ‘entrance village green providing a mix of amenity grassland and tree planting with wildflower underneath’; an ‘area of public open space’ and a ‘mix of units including terraced, semi-detached and detached properties, arranged as a simple grid of routes and spaces, referencing rural estate housing and courtyards and utilising simple building forms’.

They describe the site as a ‘highly sustainable location’ that is within ‘walking distance of shops, school and employment’.

However, local residents who attended the committee meeting and councillors were opposed to the scheme. One major concern was the access to the site via Barnaby Mead amid fears it would put more pressure on local roads and especially the High Street at busy times, coming on top of existing plans for 50 new homes nearby.

It was also pointed out that the town had earmarked the field in question as an expansion area for Gillingham School to meet the demand of more pupils once the town’s sizeable Southern Extension development is finally built. In the past, however, Dorset Council have said that to cater for more pupils from the town they would reduce the schools catchment area.

Gillingham’s mayor, Councillor Paul Harris, told fellow councillors that it was an ‘opportunistic development’ and that he shared the concerns of local residents. ‘I really don’t think we can support any of this whatsoever. We’re just storing up issues and problems for ourselves,’ he said.

Councillors on the planning committee voted unanimously to recommend refusing the application. It will now be dealt with by Dorset Council who will have the final say. 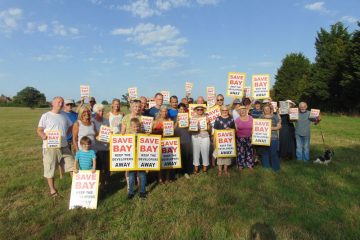