This Dorset Senior Cup Final saw the Gills pitched against a Weymouth team who play in the Southern League Premier Division, some two steps above the Gills. This was also a repeat of last year’s final, which ended with a 2-1 victory to Weymouth. As a result, the Gills had to be the underdogs going into the match, but anything can happen in a cup game.

Weymouth started the game the better and were looking dangerous going forward, but they wasted the chances created and when ex-Gill Aaron Rodriguez did find the target Jamie Beale was equal to it and parried the effort away from goal.

After having weathered the storm for the first 15 minutes the Gills began to get into the game and Elliot Bevis saw a good effort deflected by a defender, before Will Pike blasted an effort high and wide of goal.

With 20 minutes played the best chance fell of the half fell to the Gills when Aiden Chainey was brought down on the edge of the area and Elliot Bevis’s free kick went just over the bar.

After this the rest of the first half was unremarkable as both teams struggled to impose themselves on the game.

After the break Weymouth came out with renewed vigour and, once again, were dominating the game in terms of possession, but without causing the Gills too many problems. That was until the 68th minute when a well struck shot by a Weymouth player was headed for the bottom left corner of the goal until Jamie Beale pulled off a spectacular fingertip save to keep his side in the game.

Weymouth really were the better team now, but some stout defending, some good saves by Jamie Beale and, to be honest, some missed chances by Weymouth meant that the score remained 0-0 and the game went into extra time.

The start of extra time saw the game settle down again with neither team able to create any clear cut chances. However, as legs tired mistakes were being made and one such mistake by a Gill defender gifted a Weymouth player with a glorious chance as the ball came to him when he was unmarked in front of goal but, yet again, the chance was wasted with a shot that was off target.

The last minute of the first half of extra time saw a Weymouth player waste another good chance by blasting his shot over the bar. So at half time in extra time the score was still 0-0 but Weymouth were looking the more likely to score.

With 11 minutes left to play it seemed Weymouth were certain to score, but a last ditch block by Harry Montacute, denied them that all important goal.

There were only 8 minutes left on the clock when youngster Aaron O-Shea received the ball inside the area and, with just the Weymouth keeper to beat, it seemed he would write his name in lights, but just as he was about to shoot he slipped and his tame shot was collected easily by the Weymouth keeper.

The unfortunate slip was made even worse as Weymouth scored in the very next minute. AFC Bournemouth Loanee Stephane Zubaar rose highest inside the area to head home and deal the Gills a cruel blow.

Despite their best efforts the Gills couldn’t get a goal back and the Terras won the Dorset Senior Cup for the third year on the trot.

UPDATE: All passengers rescued from Jurassic Skyline gondola in Weymouth 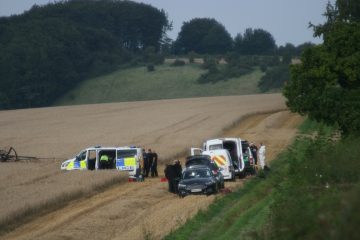