Gillingham News is a free monthly paper delivered to homes in Gillingham and Mere and available at many outlets in the area too, from Bourton and Zeals down to East Stour and Marnhull. Our aim is to provide regular local news and information about the area and to be a genuine community newspaper.

It may seem curious setting up a newspaper in the digital age but more and more smaller newspapers like ours are now springing up across the country, showing there is a genuine thirst among readers for news about where they live, and indicating that that a sense of local community still lives on. Local newspapers do not, of course, create communities in themselves. But they do provide a public forum where important local information can be shared, and provide a focal point of discussion and debate. That is what, in time, we hope to achieve with Gillingham News.

When my wife and I moved here 18 months ago we quickly sensed there was a thriving community but realised how little we knew about what was really going on. Having been professional journalists for many years we therefore decided to set up our own newspaper! We hope that you will see Gillingham News as your newspaper, providing information about your community – and where necessary going into battle on its behalf too. Standing up for the town is part and parcel of what a local newspaper should do.

Finally, it is a daunting task for a small independent company to set up a new newspaper and we want to thank all those people, too many to name, who have offered their support and encouragement for our new venture. A big thank you, also, to those local businesses who have kindly chosen to support us for this, our first edition.

Schools Update: some schools to close after snow and ice hit Gillingham, Shaftesbury and Mere 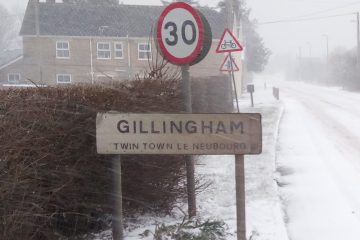