A local woman has published an honest and frank account of her life, including the shock of discovering that her new-born child was deaf and blind.

Sally Pringle, who lives near Shaftesbury, said she felt compelled to write about her life’s ups and downs. ‘I had decided to write the book years after dealing and having to cope with discovering my first born child suffered from an extremely rare metabolic disorder, then the breakdown of my then marriage after finding out about his infidelities and the subsequent death of my first son at seven years old,’ she told Gillingham News.

The result is a book ‘A Foreign Land‘, which tells of the writer’s childhood, her marriage, the birth of her first son and her emigration to New Zealand – the foreign land of the book’s title.

‘It was extremely painful to write in many chapters but I felt compelled to complete it,’ said Sally. ‘It has been written in the hope, after seeing  many families and friends who have faced similar experiences, that it will offer comfort and strength and that it will be something to relate to.

‘We had  tremendous support- all in the book, from Little Bridge House, a  children’s hospice at the time, and I wanted to voice my thanks and appreciation of their work. Without their staff then, I couldn’t have got through that week.’

She said that the title of the book was important to her for two reasons.

‘One because I emigrated to New Zealand after having only visited it for a two week holiday, so it was very foreign to me,’ said Sally, who worked in the wine trade before retraining as an English teacher.

‘Secondly, because after finding out that my first son was blind as a tiny baby, I had to retrain my mind and instinct about how to handle him and communicate so this was me venturing into a new and foreign land. A mum with a different kind of baby and so on.’

‘A Foreign Land’ is available both as an ebook and in paperback. 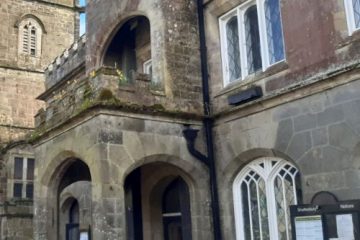