MP Simon Hoare will meet constituents in February at a second meeting to discuss local people’s concerns about the climate emergency.

The North Dorset MP first met with local people about the climate back in October and has since been in touch with government ministers to get answers on specific issues. 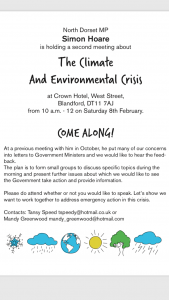 Now Mr Hoare is to have a follow-up meeting at the Crown Hotel in Blandford, on Saturday 8 February from 10 am to noon.

‘This will be an occasion to hear what response he has had from government ministers and to ask for more information and action from the new government,’ says Mandy Greenwood from Gillingham, who was one of the people who helped arrange the first meeting.

She says the second meeting will involve detailed discussion on key issues. ‘There will be opportunity to spend some of the time in smaller groups centred on particular issues such as recycling/ the future of local and international transport/ environmentally friendly building/farming, food production and use of land,’ says Mandy Greenwood.

‘This should help everyone to have some opportunity to express their concerns together in a message to ministers. These messages will be conveyed by our MP whose job is to represent us in Parliament.’

Mandy Greenwood says she hopes as many people as possible turn up for the meeting, whether or not they have detailed knowledge of the issues involved. ‘What is most important is to show our MP that many people feel this is the overwhelming and urgent issue for governments to address. Numbers at a meeting make a big impression!’

And she is especially keen that younger people turn up.

‘It was noted at the last meeting that there were surprisingly few younger people present,’ she says. ‘Please spread the word to families and young people and support them in being at the meeting.’

Mandy Greenwood is organising car sharing between Gillingham and Blandford. Please contact her,
whether you are willing to be a driver or would like to be a passenger, at [email protected]