With the future of the ex-Budgens superstore in the centre of Shaftesbury still in doubt this month, campaigning local resident Julian Prichard says he wants to turn it into an innovation and resource centre for young people.

Both Morrisons and M&S Food are rumoured to have shown an interest in the site in recent weeks but so far they have made no public announcements.

Mr Prichard, the driving force behind the Save Our Beds campaign for Shaftesbury’s Westminster Memorial Hospital, told Gillingham News: ‘It upsets me to see the building sitting there doing nothing and I’d like to see it turned into a dynamic centre for young entrepreneurs.’

He said he has been working on the idea with others for some time and the superstore building would be ‘perfect’ for what they has in mind.

‘We see it as a mixture of community and resource centre, a focus for start-ups, volunteering and charity work to encourage young people who want to become digital entrepreneurs to stay in the town and give us the benefit of their ideas and enthusiasm.’

He added: ‘It could include a mini-market of local produce to encourage local producers and perhaps even make meals to order for older people. The possibilities are almost endless.’

The building has stood empty since previous leaseholders Food Retailer Operations Ltd (FROL) trading as Budgens, who took over the store from the Co-op last July, went into administration in February this year. And the future of the 9,278 square feet (862m2) store continued to be uncertain last month.

London-based commercial property agents Savills, acting for the administrators, revealed the lease on the building is in the process of being surrendered back to the Danish investment company that owns the freehold because no one is interested in taking on the remaining seven years.

Danish property investment company K/S Focus-Shaftesbury, based near Copenhagen, bought the premises from Gateway Properties in 2006 for £4.1 million but the property is now estimated to be worth nearer £2 million.

When Gillingham News tried to contact the company in Denmark last month its number appeared to have been discontinued and the company’s London-based lawyers refused to comment.

Morrisons categorically denied it had any interest in the store, claiming it was only interested in stores with a floor area of more than 25,000 square feet.

But M&S Food said it was interested. A spokesperson for M&S Foods told Gillingham News: ‘We are always looking for new store locations so that we can best serve our customers.’ She added: ‘Whilst we are interested in bringing an M&S offer to the Shaftesbury area we don’t have anything to confirm at this stage.’ But the spokesperson denied reports it had already rejected the Budgens store site or that planning authority North Dorset District Council (NDDC) had sought to ‘thwart’ discussions.

In July Shaftesbury’s mayor John Lewer had attacked NDDC over claims that it had ruined M&S Food’s interest in the site. Councillor Lewer emailed fellow town councillors asking them to investigate rumours that M&S Food had lost interest in the store because NDDC had refused to make dedicated parking available to its customers at the site, which is next to a council-run pay and display car park.

‘I am disturbed, to say the least, that negotiations of this sort might go on without the town council even being informed,’ said Councillor Lewer. He said he ‘would hate to think that North Dorset council is thwarting this ambition in the short-sighted protection of [car parking] income. This behaviour is surely not in the town’s interest.’

He added the town council ‘might…consider entering into negotiations with NDDC to compensate for lost income if we were given the opportunity.’

Shaftesbury district and county councillor Derek Beer said he had had ‘no feedback at all’ on the matter although he was been ‘pushing for activity on the site’.

‘If something is stirring let’s not make it sinister but push from all quarters to help it to happen,’ he said.

But another town councillor, Lester Taylor, said he did find it ‘slightly sinister that one council’s income may be taking priority over the good of the whole town without our knowledge. We can’t address issues we know nothing about.’

Meanwhile Mr Prichard, whose uncle David Prichard helped Port Regis become one of the top private schools in Britain, admits getting finance for his scheme is ‘a tall order’.

‘I don’t have a magic wand or a money tree so I guess we might have to rely on the freeholder letting us use it on special licence for the period left on the lease if we can,’ he said. ‘Our first step is to try and make contact with the freeholder to see what they will let us do.’ 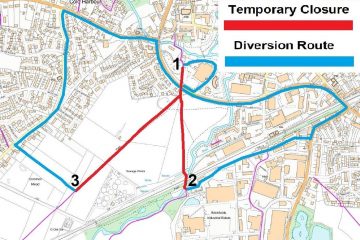