Rick Godley retired last month after 12 years as handyman at Milton-on-Stour CE VA Primary School. ‘When I started I was employed to do one hour a week and I thought I would see how it went – and 12 years later here I am, retiring,’ he says. Known to all as ‘Mr Godley’, Rick’s hours increased to four hours a week, but he often spent much more time at the school.

‘I fixed anything that broke, solved problems and oversaw contractors for projects such as the re-wiring and heating in the school hall,’ he says. ‘I was also heavily involved in the installation of the kitchen for school meals.’ Rick, who lives in Penselwood, and was also chairman of the PTFA for a time, first became involved with the school when his oldest son Benjamin started there in 2001. Formerly a photographer, he chose to give this up when his children were born.

‘Back when I started working at the school there were just 60 kids – the school has expanded considerably since then with the garden and then the kitchen.’ Retiring now that he is 65 years old, he plans on spending time on the golfing green as well as playing bass in his band, Mustang Sally.

At a presentation to thank him for his time at the school, Mr Godley told the assembled children: ‘Work hard and you can achieve your dreams.’ 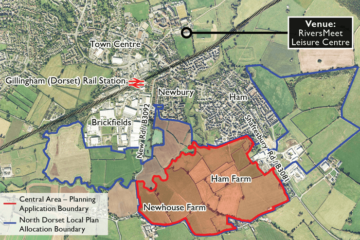