Gillingham’s newest football side, the Gill Dons, have won a league title in their very first season.

The club, which plays at Donhead, became champions of the Dorset Senior League division three on Tuesday 1 May after a 5-3 win against Donhead United, with whom they share the pitch.

The result leaves them unassailable on 58 points with three matches to play.

Tuesday 1 May and in their pitch-sharing derby against Donhead, the Wombles knew a win would secure the league but approached it just the same as any other match.
With a few wounded from Saturday’s away trip to Bridport and some unable to make kick off The Wombles were without Marc Harvey, Marcus Longdon, Shaun Ryder or Chris Burt. They once again only had one sub but were confident they had enough cover with Simon Digby and Mark Champion returning to the squad.
The game got underway and The Wombles certainly knew the prize ahead of them judging by how they started, taking little more than two minutes to go 1-0 up , Rhys McGrath heading home from an inviting Dale Hofmann cross.
This positive start quickly faded though as Donhead were in no mood to let the Wombles party and hit straight back, after what looked like a game of air hockey in the Gill Dons goal mouth. The post was rattled and a Donhead winger bundled the rebound into the net making 1-1 inside ten minutes.
The Wombles still struggled to find any real rhythm and looked tired all over following Saturday’s heroics but they still possessed flashes of danger, McGrath chipped Reece Foster in on goal but his effort was brilliantly saved by the Donhead keeper. This missed chance proved costly as Donhead broke away and their rapid number 10 punished them with a cool finish. 2-1 to Donhead and in truth The Wombles were getting what they deserved.
Through all the fatigue and poor concentration, the Wombles had put themselves in a real tricky situation but as they’ve shown all season they were up for the fight to get out of it. Matt Gaertig wound up his trademark throw-in and a Donhead defender steered the ball past his own keeper, 2-2 at half time.
The Wombles came flying out of the blocks for the restart as Foster moved more central, he got on the ball immediately and released Hofmann over the top who finished first time into the bottom corner. 3-2 to Gill Dons in this yo-yo of a football match.
The Wombles fitness was being tested to the limit and with that came slack defending all over the team. With this they were punished again as the Donhead left winger was left all alone to fire his 2nd past Tom Townsend and it was 3-3!
Only the Wombles determination to seal the league kept them going and Hofmann came to the rescue once again as he unsettled a hesitant defender and smashed them into a 4-3 lead.
What then unfolded was absolute carnage as the Donhead right winger went in 50/50 with the Wombles goalkeeper Townsend and he knocked it by him and was fouled , the ball rolled into the net but the ref had already blown for a penalty. This infuriated Donhead and The Wombles could sympathise as to why , anyway the penalty had to be taken … Adam Hoskins stepped up for Donhead but Tom Townsend guessed the right way and made the save! Still 4-3 to the Wombles with a big slice of fortune.
The game remained 4-3 until late when Gill Dons had a free kick 30 yards from goal. Foster hit a cannon of a shot that the keeper fumbled and James Weeks prodded in the rebound. 5-3 to the Wombles and only a minute left.
The clock ticked on and the whistle went, The Wombles were champions ! In fairness they were expecting a frosty Derby but other than the odd petty moment from each side there was a lot of respect and Donhead congratulated Gill Dons to show their class.
The Wombles stumbled over the line on the night it mattered but had been feeling the effects of an emotionally and physically draining encounter with second place Bridport just three days before.
The Wombles praised the incredible character from every single player involved in their first season as a club to bounce back the cup final defeat with 5 straight wins to secure the league title. They now look forward to playing Wool at home for a 12 o clock kick off where they can celebrate properly with the cup this Saturday. 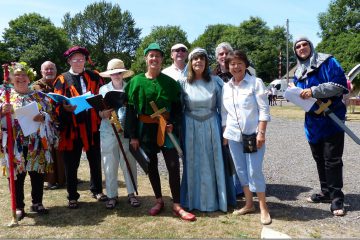