The proposal to deliver up to 1800 new homes in Gillingham has moved a step forward following the government’s announcement on Thursday of an award of £4.1 million to help deliver development of the site and improve its viability, says local MP Simon Hoare.

The award is part of the Government’s Housing Investment Fund and follows a submission made by North Dorset District Council, which was actively supported in Westminster by Mr Hoare, MP for North Dorset.

This Government investment comes shortly after the MP’s efforts to leverage £2.1million from the Department for Transport to bring forward works on the A350 between Blandford and Shaftesbury and the C13.

Welcoming the Ministry of Housing’s announcement, Simon Hoare said: ‘I want to thank the District Council for putting together a detailed and convincing bid for these important funds and I am delighted that active representations to the Department has borne fruit.

‘This funding is key to moving forward the delivery of vital housing development to meet the growing needs of North Dorset. Coming on the back of the DfT funding, I believe it illustrates the very real benefits of local councils and their MP working together closely to make a compelling case and secure investment in our area.

‘I have told Sajid Javid, the Housing Secretary, just how pleased I am and grateful that he gave a sympathetic ear to our case.’

Councillor Graham Carr-Jones, Leader of North Dorset District Council, said: ‘It‘s fantastic news that £4,064,250 has been awarded for the Gillingham Southern Area Extension. The funding will go towards significant infrastructure such as utilities and improved road networks.

‘This funding will aid the delivery of over 1800 homes in an extremely important development site allocated in our local plan.

‘As part of our Opening Doors Initiative, I am keen to capitalise on any funding initiatives in order to provide homes for our residents.’

The progress of the Southern Extension, the biggest single housing development project in Dorset, has been delayed in recent months, in part because of issues over the cost of the infrastructure such as roads to make the project work, and who pays for them.

Planning applications from developers Welbeck Land and CG Fry have just been lodged for the site.

Overall the government says up to 200,000 new homes are set to get off the ground nationally  thanks to its £866 million investment in local housing projects.

‘This first wave of investment totalling £866 million will help get up to 200,000 homes off the ground, making a huge difference to communities across the country.’ 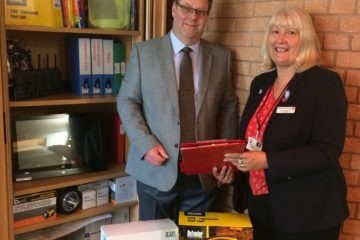