A work of art made of pearls and in the shape of a poppy is to be dedicated in St Mary’s Church in Gillingham this Sunday.

The blessing and dedication of ‘The White Poppy’ will be conducted by Canon Peter Greenwood during the morning service on Sunday February 20 at 10am.

The dedication is the latest stage in a local project; ‘Pearls before Poppies’, was the initiative of Gillingham resident Anne Kings, and supported by many local people who were asked to donate loose or broken pearls in memory of someone who they had loved and lost, to raise money for the Royal British Legion Poppy Appeal.

Anne explained: ‘I received thousands of pearls from all around the area, but of course so many, although beautiful, were of no value.

‘Initially I had said that any such pearls received would be given to charity, but as I sifted through them and read the dozens of messages that came with them, I knew then that I just couldn’t give them away; so while I continued to make up all the beautiful necklaces, I was also thinking of how I could use the remaining pearls.

‘I really can’t say how many times I have had to wipe away the tears as I have been threading up a necklace, the pearls having been donated with very moving stories. Every single pearl began to mean something quite special, and a memory of someone who was loved.’

Then, said Anne, during late spring, Nikki Gray, from jewellers Allum & Sidaway, was able to assist with the necklaces.

‘Luckily I have a very dear friend, Shireen Brickell, who is a local artist, and after many, many hours of work produced the most beautiful wall collage using all the remaining pearls,’ said Anne.

It was decided to depict a White Poppy, because a white poppy is the symbol of peace, and that this would go on display in St. Mary’s Church, Gillingham, for the last Remembrance Day Service. It has remained for people to see as they enter the church.

‘Now, with the generosity of Allum & Sidaway Jewellers, I am delighted to say that they have agreed that ‘The White Poppy’ will remain in St Mary’s Church on display in the Chapel of The Good Shepherd, which is the chapel of Remembrance,’ Anne said.

Call for stall holders for Town Meadow fete in July 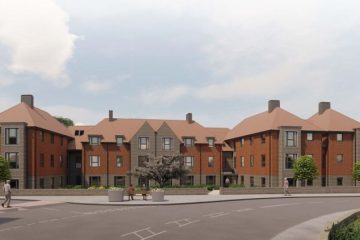