Wiltshre Police are appealing for witnesses to a public order incident on the A303 over Christmas.

At approximately 1.15pm on Boxing Day a man in his 50s was driving between Wylye and Winterbourne Stoke when he was cut up by another vehicle.

The driver of the offending vehicle then made an offensive hand gesture towards the driver before getting out of his vehicle when traffic came to a stand-still and attempting to break the victim’s window.

Another driver of a vehicle which was also stuck in traffic then got out of his vehicle and approached the victim’s car. Both men continued to attempt to smash the victim’s car window.

The victim eventually managed to drive off along the A303 in the direction of Exeter.

Fortunately no damage was caused to the vehicle.

The first man is described as approximately 5 ft 9 inches tall, approximately 45 years old, balding and wearing a leather jacket. He was driving a black Mercedes.

The second man is described as young, 6 ft 6 inches tall and of muscular build.

Anyone who witnessed the incident or has dash cam footage of the incident should call 101 and quote crime reference number 54190127617.

The first signs of autumn at Stourhead gardens near Gillingham 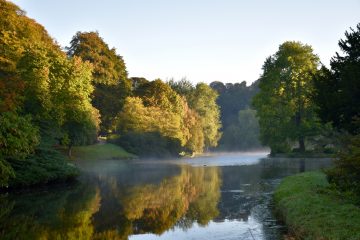