Police in Salisbury continue to search for Michal Kisiel, aged 30, a prisoner who escaped from prison guards at Salisbury District Hospital.

Kisiel left the hospital at around 7:00 pm on Tuesday 30 May 2017 and requires treatment for a head wound.

He is described as white, 5’6 tall with blonde hair and of medium build with tattoos on his neck. He was wearing grey tracksuit bottoms and a black t-shirt with blue trainers.

He is believed to have a razor blade in his possession and is considered to be dangerous. The public are advised not to approach him for their own safety. If anyone sees a man matching the description they should call 999 immediately. 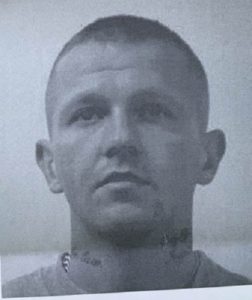 Extensive searches were carried out last night including those with police dogs, helicopter and with the Special Constabulary Unmanned Aviation Vehicles (also known as Drones).

Detective Inspector Mark Kent from Salisbury CID said: ‘CID in Salisbury have taken over the investigation and we are working closely with the Ministry of Justice and local policing teams.

‘The search for Kisiel continues and we are exploring a number of leads, particularly looking at transport routes out of the City and liaison with our surrounding forces. A key line of enquiry is the fact that this may well have been a pre-planned escape and Kisiel may have had assistance.

‘My officers will be conducting house to house enquiries in the area surrounding the hospital this morning.

‘We ask that anyone who has information on the location of Kisiel comes forward, he does require treatment for his head injury and is considered to be dangerous.

The public should not approach him and should ring 999 immediately if they see him.’

Inspector Pete Sparrow said: ‘Public safety is our priority and we are doing everything we can to find this man. Extra hi visibility reassurance patrols will be ongoing in the local area. We will keep the community updated but if anyone has concerns I would encourage them to speak to their local Community Policing Team officers via 101’

Anyone with information is asked to call Wiltshire Police on 999.

Escaped prisoner arrested near Salisbury after tip-off from public