A vision for the future of Gillingham was outlined by Mike Gould, a town councillor, in a talk to the members of the Gillingham Probus Club on Tuesday, 29 October.

Councillor Gould told the meeting about his involvement with the ‘Town Team’ in planning for future challenges, needs and opportunities.

He explained how the Town Team wanted to rejuvenate the central core of Gillingham. This was sorely needed, he said, with the national trend of the demise of the High Street inevitably having an impact. A considerable expansion in housing was already planned on the sites of Newhouse Farm and Ham Farm which would bring a major increase in population.

Future plans are focused on the land round and near the railway station – the ‘Station Hub’ – where he said the Town Team envisages the creation of ‘destination reasons’ for visiting Gillingham. These include recreational facilities (such as a cinema); a technical hub (for which fast internet speed is essential); and opportunities for mixed-use start-up businesses.

The Station Road area, the former Co-op site and the Brickfields business site have all been identified as appropriate for improvement. Councillor Gould said the need for a hotel is also recognised, probably in the Orchard Park area, and there is a requirement for more car parking at the station which could be achieved by building a second tier, some with electric charging points.

He said the Town Team is also focused on the heritage aspects of Gillingham, working with Historic England and other bodies to look at possibilities for creative improvements. Meanwhile, local businesses are considering whether the establishment of a ‘Business Improvement District’ (BID) is appropriate for Gillingham. This would be a business-led and funded body, established to improve a defined commercial area.

This look at the future followed the talk at the previous meeting of Probus about the past history of the town. The club meets on alternate Tuesday mornings at the North Dorset Rugby club and new members are always welcome. Further details are on the website: www.probus-gillingham-dorset.org.uk

Warning to walkers to close gates after escaped cattle cause £10,000 damage to garden 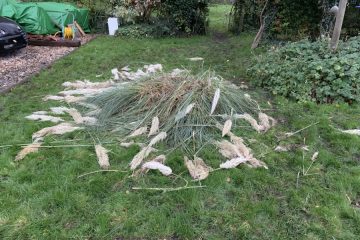