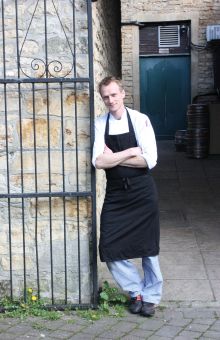 The kitchen at the Phoenix Inn may not be large or particularly glamorous but for Gino Gibbs (left) it is a place from where he can rebuild his life – and grab the second chance that’s been given to him.
A talented chef, he began working at the pub on Gillingham’s The Square two months ago, and already his way with ingredients is having an effect, with the number of diners on the up. On May 6, Gino launches the pub’s new menu with dishes such as ‘lamb rump served with kale, Chantannay carrots, Mario potatoes and a limoncello jus’ alongside deluxe burgers and traditional favourites including fish n’ chips and home-made lasagne. And he has already introduced regular World Cuisine nights (next up is Italian).

This success, and the normality that comes with it, is all very different to his life just a short time ago. Back in May last year he was convicted of defrauding a friend of his father’s out of £7000. Instead of, as promised, using the money to pay off debts, he used it to fund a drug and alcohol addiction that had held him in an iron grip for over a decade, and which had also acerbated a mental health problem that had its roots in his childhood. ‘At the time I was a mess,’ says Gino, 35. ‘I had completely lost my way. I didn’t think about the future – I didn’t think I had a future. I was always going to die either by suicide, or because the amount of chemicals I was shoving into my body would kill me anyway.’
Gino’s problems began innocently enough – playing football, aged 21, he badly broke his leg, and to cope with the high level of pain he was prescribed liquid morphine and codeine. He was on the drugs for a year and by the end of it, he was addicted to both, able to continue taking codeine through readily available over-the-counter drugs.

The effect of the addiction on Gino was enormous. A tough childhood of bullying and abuse had resulted in a mentally fragile young man, who was highly anxious and prone to depression, and addiction set him on a downward spiral. What he calls ‘a bad set of friends’ introduced him to cocaine, and it quickly became part of a toxic cocktail that took over his life. ‘I was pretty high most of the time,’ he says. ‘My addiction had become uncontrollable.’

Perhaps surprisingly, it was during this time, that his flair for cooking first showed itself. ‘Despite all the drugs I always managed to look presentable and to do my job well,’ says Gino, who was then running a nearby pub. Asked by a friend to help him out at four-star restaurant in the Austrian Alps, Gino took on the role of breakfast chef. ‘And I discovered I was good at it,’ he says. ‘I developed a real love for food and cooking so when I was offered a full-time job I stayed on. Over the next 18 months I was trained up across all the food areas, from starters to main meals and desserts, and I learned an incredible amount.’

Drugs were never far away, however. Returning from Austria in 2015, his cocaine addiction continued and he was also drinking heavily, and he soon found himself in a vicious cycle of ever-mounting debts and lies. ‘I was lying to absolutely everybody and getting even more anxious and panicky, trying to be two steps ahead of all myself and all my lies,’ he says. ‘My depression grew worse until I had no strength or will to do the most simple tasks like brushing my teeth or showering. I would envisage my suicide on a daily basis.’

His conviction related to a pub Gino’s father had bought and asked Gino to run. ‘By the time it opened I was a mess,’ he says. The pub lasted six months and Gino was left heavily in debt. ‘My father’s friend gave me the money to help me pay off the debts, but I spent it on drugs instead,’ he says.
Gino was sentenced to 20 months in prison, suspended for two years, and told to do 100 hours voluntary work and attend a drug rehabilitation programme. Today he is clean of drugs and alcohol. The pain of coming off opiates was agonising, ‘like having a million bugs crawling under your skin,’ he says. Last autumn he spent six weeks at Clouds House, a drug rehabilitation centre in East Knoyle. ‘There I was really able to face up to what I had done and come to terms with everything that had happened to me and the reasons for it,’ says Gino. ‘I was able to see that I had a choice, that my recovery was my own responsibility; it was up to me to do things right.’

Righting the wrongs he has committed is a long, tough road, but he is getting there. Living in a shared flat, he is paying back the money he stole at a rate of £600 a month and to fulfil his voluntary work, he is at the Sue Ryder charity shop on the high street every Monday. The woman he defrauded has forgiven him. ‘After I got out of Clouds she wrote to me with such sincere and sweet words – they are a driving force to me staying clean and working hard to pay her back,’ he says. ‘Six hundred pounds a month is a lot but when you weigh it up against what I did and what she went through it’s a small price to pay.’

The job at The Phoenix is also key. The decision to employ Gino was not an easy one, given his record. ‘But his personality came through at the interview and we could see his massive desire to be given a chance,’ a spokesperson for the new owners of the Phoenix Inn told Gillingham News. ‘The directors collectively agreed to give him this opportunity, and today we feel that it was absolutely the right thing to do. He has turned a corner now, and you can see that. When he came to us he had no confidence at all, but now he is a different person. You can hear singing coming out of the kitchen, and his energy is infectious. And, of course, he is producing amazing food, way beyond anything you would expect to find in a pub. When we realised what he could do, we decided to cut him loose, and we’re already seeing the results in the dishes he is producing.’

Gino, too, is determined to flourish in his new job. ‘I have been able to shut the door on those things that always dragged me back under,’ he says. ‘The faith and confidence in me from strangers is amazing – the owner of the Phoenix have given me great responsibility and they also constantly offer support both professional and personal too. I now have solid foundations which are essential for anybody in recovery.’

His family are also willing him on, his mum and dad have both visited and his sister and her family recently came for Sunday lunch.

Gino wants to make the Phoenix Inn a place to eat out in Gillingham. ‘I want to give people traditional pub food with a twist,’ he says. ‘Double-stuffed burgers, rack of lamb with a limoncello gravy that tastes amazing – there are loads of little things that I have picked up along the way that I want to use here. These days you need to give people a reason to spend their hard-earned money – and delivering great dishes at affordable prices is my way of giving something back.