A public showdown with senior Dorset Council officials has been demanded by Shaftesbury councillors after a series of recent alleged planning and highways failures has caused anger among both town councillors and local residents, writes Richard Thomas.

The chairman of Shaftesbury Town Council’s planning and highways committee, Virginia Edwyn-Jones, has said she is now writing to Dorset Council insisting a public meeting is held in the town hall for Dorset officials to answer questions from local people.

This follows angry exchanges at a town council meeting on 2 November at which Dorset Council officials were heavily criticised by both town councillors and members of the public for a string of failures.

Among the alleged failures are:

• The ‘accidental’ felling of part of a commemorative avenue of mature beech trees during the construction of the new Lidl store in Christy’s Lane because planning conditions were not adequately monitored or enforced. Lidl is said to be facing a ‘fine’ of some £250,000 in compensation for the breach.

• The ‘inadequate’ standard of surveying that Dorset Council is insisting on using to justify the destruction of historic Dinah’s Hollow on the C13 to the south of Shaftesbury to allow its use by HGVs.

• More than two dozen problems with the town’s roads recently highlighted by some 30 local people who turned up at a special Dorset highways surgery in the town hall last month to demand action.

Among action asked for was to the unfinished and unadopted roads on the Persimmon development east of Shaftesbury and opposition to a plan to close Bimport to through traffic for a week in January for drainage works.

Bimport is the only access road in Shaftesbury to Westminster Memorial Hospital, the town’s ambulance station, a hospice, a day care centre, and an old people’s home.

Councillor Mrs Edwyn-Jones said: ‘So many things have gone wrong recently that we really want to know what’s going on. People are angry and councillors are angry and the debacle over losing the beech trees in Christy’s Lane was just the last straw.’

Her deputy, Councillor John Lewer, told the meeting he was not satisfied with a simple request to Dorset Council to face the public but said the council should demand the attendance of senior officers because of the seriousness of the problems.

In October Lidl told Gillingham News that they  ‘sincerely apologised’ for the ‘unintentional damage caused to three trees on Christy’s Lane’. A spokesperson said: ‘We would like to reassure the local community that we take this matter extremely seriously and have been working closely with Dorset County Council regarding mitigating measures.’

• A subsequent meeting in Shaftesbury between Dorset officials and town councillors appears to have agreed a planting scheme in Christy’s Lane to start to restore the damage caused by Lidl’s contractors. But no date has yet been set for the work to begin. 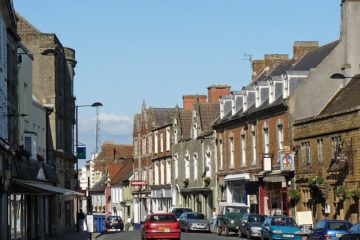