Spanning three generations, five members of one family have had their heads shaved to raise money for the Douglas Macmillan Oncology unit at Yeovil Hospital in Somerset and to remember Ian White, who died of lung cancer two weeks ago.
Ian was intending to take part in the Brave the Shave; Get Bald but sadly died before he could and his place was taken by his father-in-law.
The fund-raising event was organised by Ian’s wife, Toni Haynes. ‘We want to raise £5000 for the oncology unit to say thank you,’ she said. ‘The money will be used to provide tablet computers for entertainment and other items such as PIC line covers and hand massage. They seem like small comforts but they make all the difference. Chemotherapy is such an inhumane process and any small gesture of comfort is huge for those going through it.’
Toni and Ian met online in 2004 and for 13 years had a long-distance relationship, she in Gillingham, he in Huntingdon. They finally moved in with each other last May; one month later Ian was diagnosed with stage four lung cancer.

They were married at Gillingham Methodist Church, last August, and  Toni, a tailor, made fabric roses for her bouquet. At Ian’s ‘Life Celebration’, 1001 of these hand-made roses will decorate the church.
Over the last year Ian underwent gruelling treatment;  he then contracted cancer-related pneumonia and died on June 30 in hospital.
‘Ian was the most amazing person,’ sais Toni. ‘He would be quite cross that he is not here. For me, it is bittersweet, I will probably cry when I have my head shaved.’

Joining Toni were her sons Dan, 23, and Joey, 20, her mother Joan, who herself had breast cancer 12 years ago, and her father John.
While everyone’s else’s hair was short, Dan’s was two feet long. ‘I had a bad haircut 10 years ago and decided never to have another one,’ he laughed.
Despite this, when Toni asked him to have his haircut, it was an easy decision to make. ‘I actually work for a company that fundraises for charity and I was working on behalf of Cancer Research when Ian was diagnosed,’ he said. ‘I always knew I would do something with my hair, and this was the right  opportunity .’
Dan’s locks, which had to be tied into four ponytails before they could be cut, will be donated to the Little Princess Trust which makes wigs for children who lose their hair through chemotherapy.

Joey did not hesitate either: ‘Doing this means a lot to me,’ he said.  ‘Ian played a big part in my life and we had a lot of things in common.’
This will be Joan’s second shave, having removed all her hair when she was undergoing chemotherapy all those years ago. ‘It was falling off in tufts and one day, some fell into a roast I was cooking, and that was it! It all had to go!’
For John, if it meant raising more money, it was worth it. ‘It’s just a hair-cut that’s a bit shorter than usual.’ he said.
The hair shave, which was carried out at Diamond Scissor Barber Shop on Gillingham’s High Street free of charge, was a meticulous process, with the hair first shorn off using a razor. Then shaving soap was applied and an old-style scalpel used. A burning taper was also applied to singe off any excess hair. Finally, aftershave was applied.
Toni was the first to be done. ‘Ian would have felt so proud and so honoured, and also humble, to have people doing this for him,’ she said afterwards. ‘Then he would have spent the rest of the day, stroking my head and telling me how sexy he thought it was!’

**To donate, go to the Just Giving page: www.justgiving.com/fundraising/toni-haynes1 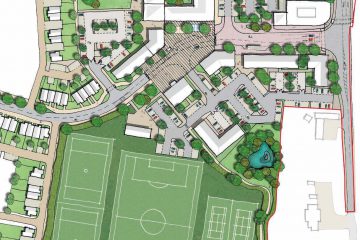