The UKIP parliamentary candidate for North Dorset at the 2015 general election has decided not to stand in the election on 8 June.

Steve Unwin, who picked up 9,109 votes in 2015 and came second to Conservative Simon Hoare, said he had made his choice after talking to UKIP members about what the party sees as the key issue at stake – Brexit.

‘The vast majority of our members and supporters have made it quite clear that they wish us to allow Theresa May to gain the mandate she claims she needs to bring about a full and clean UK exit from the European Union,’ said Mr Unwin in a statement.

Mr Unwin said he came to his decision despite fact that Mr Hoare, who won with a majority of 21,118 in 2015 and is standing again, had backed remaining in the EU at last June’s referendum.

‘Simon Hoare has consistently stated he will abide by the decision in the referendum and will not frustrate the will of the majority of those of the British people who voted to leave,’ said Mr Unwin.

‘I will therefore not oppose Simon Hoare, despite his past pro-EU leanings, and in spite of coming second in North Dorset in the last general election.’

However, the UKIP member stopped short of fully endorsing the Conservative candidate.

‘I will not however be giving him any support, as I do not want to be party to legitimising any Tory back-sliding from a true exit from the EU that may occur in the future. My message to Simon Hoare is, although you are all wearing UKIP clothing, we will be watching,’ said Mr Unwin.

The decision by UKIP not to field a candidate in North Dorset reflects a national trend, with the party standing in just two thirds of the constituencies it contested in 2015.

In South Gloucestershire, for example, UKIP has said it will not field any candidates at this election.

UKIP’s Russ Martin, who stood in the 2015 election for Thornbury and Yate where he won more than 5,000 votes but who is not standing this time in a seat that has a Conservative majority of just 1,500, said it was a ‘strategic’ decision.

‘I’m looking at the bigger picture for Brexit and I don’t want to jeopardise the outcome,’ he said. 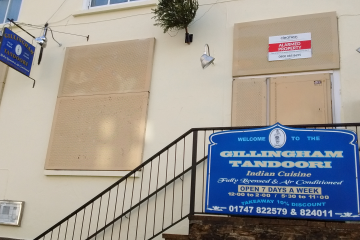