Campaigners from Gillingham, Shaftesbury and south Wiltshire have joined forces in a bid to stop the proposed closure of 15 inpatient beds at Westminster Memorial Hospital. As the deadline for consultation on the controversial project loomed, volunteers were busy in Gillingham persuading local people to fill in a questionnaire and voice their opposition to the scheme. Julian Pritchard of the campaign group Save Our Beds (SOBS) says that out of 8,500 questionnaires returned in Dorset some 4,200 have come from the Shaftesbury and Gillingham area alone. ‘That shows people are up in arms over this plan,’ he says.

Critics say that the closure of the beds at the hospital will force relatives to make journeys to Sherborne or Blandford to see loved ones and that reducing the number of beds here does not make sense in one of the fastest-growing areas in the region. There are also claims that the three-month consultation was not properly carried out in areas such as south Wiltshire where many people use the hospital’s services.

Indeed, the Dorset Clinical Commissioning Group (CCG) which is behind the plans may yet face legal and administrative challenges over its refusal to extend the consultation period which formally ended on 28 February despite pleas from local campaigners, councils and two local MPs.

In Gillingham the fight against the beds closure culminated with a pop-up campaign centre just off the High Street where members of the public were encouraged to complete questionnaires. SOBS also laid on the Shaftesbury Brass Band’s white transit van which went around Gillingham with a tannoy system urging people to fill in the forms, while volunteers were also canvassing shoppers at ASDA. North Dorset MP Simon Hoare, Gillingham mayor Barry Von Clemens and a number of councillors turned up to show their support for the action.

‘We are all working together, the whole county, and councils at all levels, as part of the wider community,’ said mayor Von Clemens. ‘The people in Gillingham do not want to see the beds go because they are vital to the local community.’ The mayor said they and other groups had examined the CCG’s proposals to turn Shaftesbury into a community ‘hub’ with no beds while keeping beds at Sherborne and Blandford. ‘We have come up with some big holes in the consultation. To start off with the cost savings don’t tally up. The logistics don’t tally up.’ The mayor said that the CCG appeared to have reached its proposals to axe hospital beds based on data from the north of Dorset. ‘If they take into account the need from Wiltshire and Somerset then in fact we have not got enough beds rather than having too many,’ said the mayor.

Julian Pritchard from SOBS agreed. ‘If you take Shaftesbury, Gillingham and the surrounding areas we’re almost the size of Salisbury,’ he said.

Mr Pritchard said SOBS had not had time to campaign in areas such as Mere and Tisbury and warned that if the CCG did not extend the consultation period they could face legal or administrative challenges from campaign groups. ‘There will be a number of challenges. We are looking at teaming up with other campaigns in Dorset so that we have a unified voice,’ he said. His group has been coordinating efforts to get as many people as possible to fill in questionnaires and oppose the scheme, and hopes that 4,200 or so collected will sway the argument. ‘They are the one chance we have got of breaking the CCG.’

Simon Hoare MP said the CCG had promised to him that it would be a proper consultation with ‘no done deals’ and that he was seeking an urgent meeting with them once the public’s submissions had been analysed. ‘If the public have said overwhelmingly no, I expect the CCG to be good to the word they gave me and the community that this was a consultation and that they would be responding to what people said,’ said Mr Hoare, who has also called for the consultation period to be extended. A spokesman for NHS Dorset CCG said: ‘The length of the consultation is in line with best practice and we are confident that since the launch of the consultation in December 2016 we have reached a high enough number of people, therefore we will not be extending the consultation period which ended on 28 February 2017.’ But South-West Wiltshire MP Dr Andrew Murrison warned that the consultation process could be subject to judicial review because a substantial part of the population concerned had ‘not been properly consulted’. 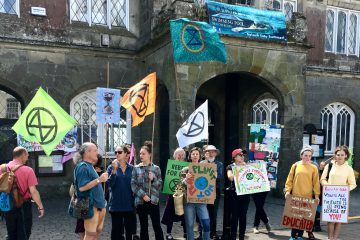